Heading into our football issue we wanted to set the stage, let everyone know we're still around, and yes, assure you that there is a killer issue on its way, curated by our awesome guest editors, Brooke Kolcow and K.C. Mead-Brewer. To that end, welcome to The Offseason, and the first of what we hope to be many interviews in a series called Overtime.

First up is Eli Cranor, a former quarterback that has played pro football in Sweden, coached high school in Arkansas, and during the early days of the pandemic, self-published a middle-grade novel called Books Make Brainz Taste Bad. Flash forward to now, and he is the winner of the Peter Lovesey First Crime Novel contest at Soho Press. We talk about playing college and pro ball, the transition from football to writing, and most importantly, get his pick for this year's national championship. His novel, Don't Know Tough, is set to be released on March 8, 2022.

Let’s start off with Florida Atlantic (FAU). You redshirted your first year and then transferred, but the head coach, Howard Schnellenberger, was a legend. He saved football at Miami in the 80s, essentially did the same thing for Louisville after that, and then built the program at FAU from scratch. With Miami, he also brought a pro-style offense to the college game. How much were you able to soak up in that year, and what role do you think that played in your success after transferring to Ouachita Baptist & then going pro in Sweden?

Schnelly was a trip, man. He drove around practice on a golf cart, smoked big-ass cigars, and would tell the wide receivers to get down in three-point stances. FAU was a dream. Right by the beach. A ton of fun. But in the end, I’m an Arkansas guy through and through. My time there really helped me at Ouachita. Gave me a different perspective on a lot of things.

Speaking of Sweden, we don’t really think of that country as a hotbed for American football. When you were there, did it feel like the game had really taken hold with the locals?

Not really. It was really big to a small group. I don’t know what to compare it to in America, but it definitely had a small, devoted following. The games were televised, or at least some of them were. So that was cool. There’d be posters up around town (I still have one in my office). I wouldn’t trade that year for anything. It really shaped who I am. Gave me a chance to see another part of the world. We played teams in Germany, Austria, and of course all over Sweden. 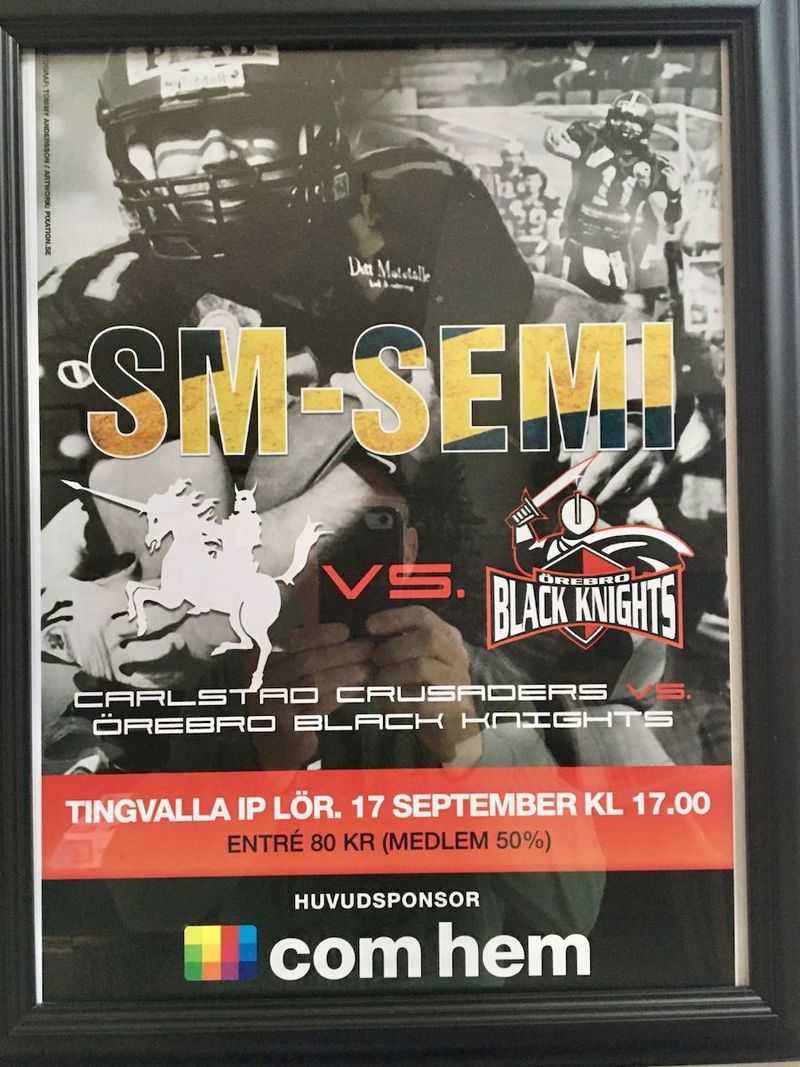 After playing in Sweden, you ended up back in Arkansas coaching high school. What was it that took you away from coaching and led you into writing?

Two things. First, my daughter was born. Some guys can balance the life of a coach and a dad—I couldn’t. There just wasn’t enough time in the day. The second thing was that I’d become a head coach by age 26. I wasn’t ready. As a result, we only won one game during my two seasons. Getting beat like that really put a bad taste in my mouth. Looking back now, I don’t know that I would’ve ever gotten out of football and started writing if I hadn’t had those two, disastrous seasons. Funny how things work out.

You’re from Arkansas, and I’ve got a good friend that played high school ball in north Texas. In the summers I would go visit him and occasionally that time overlapped with two-a-days in that brutal Texas heat. I would watch, help with water, whatever they needed. You probably experienced the same weather in Arkansas. Going through those physical conditions in the context of a team sport, you’ve got the camaraderie of your teammates to lean on. With writing, that camaraderie is essentially gone. How have those experiences translated to your life as a writer?

Regarding the heat: I can remember during two-a-days in college, it’d get so hot down in south Arkansas sweat would drip off my pinky like it does in the shower. Just a constant stream. We had to weigh in before and after practice. Some days, I’d lose as much as ten pounds per practice. And yeah, I think that sort of commitment has helped my writing. Trying to get a book published is a grind. It’s so much more lonely than football. There’s no team. Nobody watching in the stands. I didn’t really know anybody in the industry or have any connections starting out. I’d just heard somebody say that you need to write every day. I don’t know if that’s necessarily true, but it’s what I did. I think that really helped early on. I wrote over 200 short stories and nine complete manuscripts before I got my first book deal.

In your novel, Don't Know Tough, the voice jumps out at the reader instantly. Within the first page, it feels like we’re living with the main character, Billy. Did it take a while to nail down the right voice?

Thanks for that, man. Billy’s voice, at least to me, is what makes the book. Billy’s a mix of a lot of kids I coached during those five years. His voice came to me during a lunch break my last year coaching high school ball. I had about an hour, and I just had that first line, “Still feel the burn on my neck.” I wrote what would later become the first chapter during that break. All the pain I’d witnessed from getting close to my players—it just came pouring out. It’s funny, so much has changed over the editing process for DKT, but that first chapter has pretty much stayed the same. I sent it off as a short story and it won Greensboro Review’s Robert Watson Literary Prize, which was my first serious publication. That’s when I knew I had something and tried to turn it into a book. 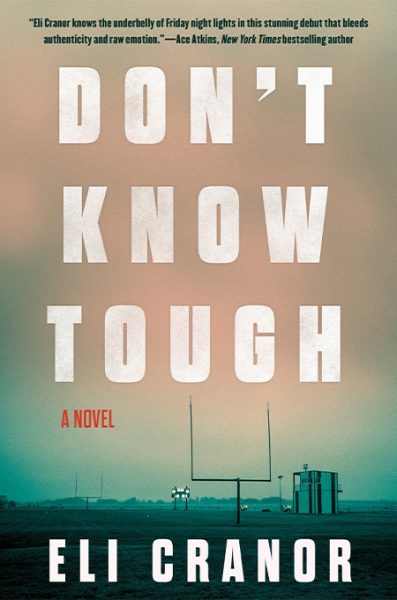 It’s clear from the outset that football is an outlet for Billy. His home life is a mess, but on the field, he can rage and let out the anger that is, at least in the beginning, suppressed at home. There’s a scene where Billy is at practice and they’re doing a 1-on-1 drill. Two lines on either side of each other, and a small lane for someone to carry the ball, another player trying to tackle him. Going straight at each other. Billy’s carrying the ball, but he wants to be the one inflicting the pain. You do a lot in this space to introduce us to the pain, both emotional and physical, that Billy is in. After running over his would-be tackler, he initiates a helmet-to-helmet collision, and this line sticks in my head:

How important was it for you to show both the good and bad aspects of football as an outlet?

Very important, but it was tough. Football has given me so much: an education, a year in Sweden, so many life lessons. But there is a dark side to the game. I really tried to walk the line. I didn’t want DKT to be a football-bashing book, but I definitely didn’t want to sugarcoat anything either. So I tried to focus on the problems with how people react to the game, the way high school boys can become untouchable due to their on-the-field accomplishments, especially in small, Southern towns. I’m happy with how that part turned out.

In the early days of the pandemic, you self-published a children’s book, Books Make Brainz Taste Bad, and then there was a new interest in Don’t Know Tough. The last two years of your writing life seem like a whirlwind. How unexpected is all of this?

Whirlwind is a good word. I was querying DKT (for the second time) right around the end of 2019. By March of 2020, I had over thirty full-manuscript requests, and then the world shut down. All the agents backed out. Nobody offered representation. I didn’t know what to do, and then I had this idea about zombies posing as teachers and using screens to fry kids’ brains—because fried brains taste better, obviously. I’d never written anything for kids before, but doing a middle-grade book was a blast. My parents were teachers, I’m a teacher now—so I was able to self-publish the book and get it out to a lot of schools in our area. I already had the second BRAINZ book written when I got word about winning Soho’s Peter Lovesey First Crime Novel Contest. I still have kids email and ask when the next BRAINZ book is coming out, and, honestly, I don’t know what to tell them.

I know you’ve said that Larry Brown, Flannery O’Connor, and Elmore Leonard are influences you look to. Your series on Crimereads, Shop Talk, is one of the places I go to learn things about writers I like and try to see if there are any tidbits I can take to try and get better. How has that series informed your own process?

I learn something every single time I do one of those interviews. It’s been such a treat, and I’m super thankful to Dwyer Murphy and CrimeReads for letting me do it. Also, big thanks to Paul Oliver, my publicist, for hooking me up with them. It’s funny, whenever I finish one of those interviews, I always change my process up a little bit. I try out something that the author said. Sometimes it sticks. Sometimes it doesn’t. But that’s the beauty of it. That’s why I wanted to start the thing in the first place. It’s just like when I was coaching. I’d call other coaches and ask them how they’re running their power-run scheme, or how they structure their offseason program. I’d rarely end up doing things just like they did, but I always learned something from studying their process.

William Boyle is one of the best line-by-line writers working today. His stuff is pure poetry. Baseball plays a role in the inciting event of his latest novel, Shoot the Moonlight Out.

Megan Abbott needs no introduction. For my money, she’s the reigning queen of crime fiction. She has all sorts of sports-related novels, but her latest, The Turnout, focuses on ballet. And if you don’t think ballet is a sport, read this book and check back with me.

I’ve been a Michael Koryta fan for a minute now. Love everything he does, but my absolute favorite book he’s ever written is called, The Prophet. It’s the best football novel I’ve ever read.

*Bonus: Ace Atkins is a legend in the crime-writing world. Check out his Quinn Colson series for some great, Southern-fried crime. What’s the sports connection? Ace played defensive end for Auburn, had his picture on the cover of Sports Illustrated, and his dad was an NFL football coach. Need I say more?

**Double Bonus: John Vercher has an amazing new novel hitting shelves this summer called, After the Lights Go Out, which features an MMA fighter at the end of his career.

***Triple Bonus: S.A. Cosby. If you haven't heard of Blacktop Wasteland and Razorblade Tears then you've probably been living under a rock. What you might not know is that Shawn was a beast wrestler back in high school.

There’s this song called “Huntsville International” by G-Side. It has a great line that goes: “Half gangsta, half amazing. Alabama’s hero—Nick Saban.” So, yeah. I wouldn’t bet against Saban, man. I’ve got Bama going all the way.