Don West, poet laureate of home shopping networks, bullhorn voiced, mustachioed pitchman supreme, is selling a Michael Jordan card, and not just any Michael Jordan card, but a refractor, an oversized, limited edition, serialized, Upper Deck authenticated, Command Performer refractor, the most resplendent of all Michael Jordan refractors, and when you order this Michael Jordan refractor, you also get a Shawn Kemp refractor, and a Penny Hardaway refractor, as well as a selection of not one, not two, not three, but four, count ‘em four, National Hero commemorative die-cuts, but only while supplies last, so “Be dialing, folks!” because there’s only thirty-one sets remaining. Don West insists that the Michael Jordan refractor, alone, is trading for up to $200, “If you’re lucky enough to find him!” but despite this, he’s selling the Michael Jordan refractor, along with the Kemp and Hardaway refractors, as well as the Gretzky, Ripken, Griffey, and Marino National Hero die-cuts, for $149.95 total. “That’s $21 and some change per card!” Don West’s hype-man interjects, solar calculator in hand. “HOW can they do that?” I know the racquet. I’m familiar with Don West’s home shopping sideshow circus, but I don’t care. I’m all in. I pick up my phone and proceed to dial, just like Don West tells me to do. I dial the number on the screen. “Be dialing!” Don West implores, and I dutifully comply. 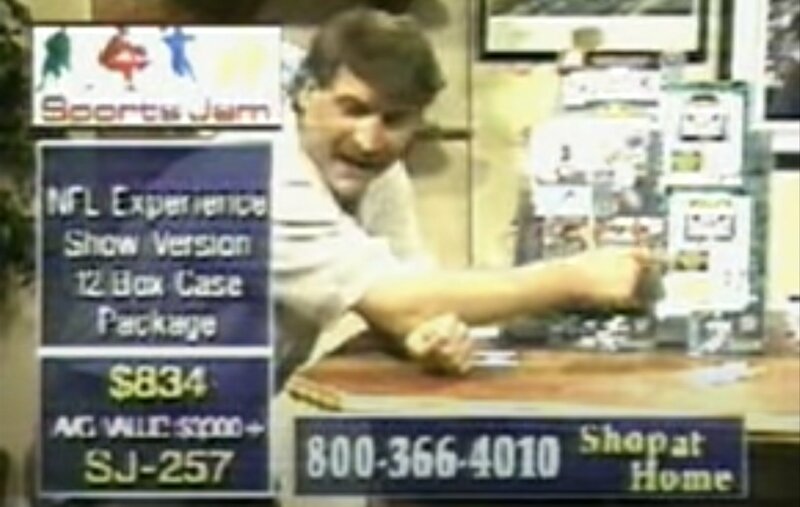 Josh Olsen is a librarian and the co-creator of Gimmick Press (www.gimmickpress.com).